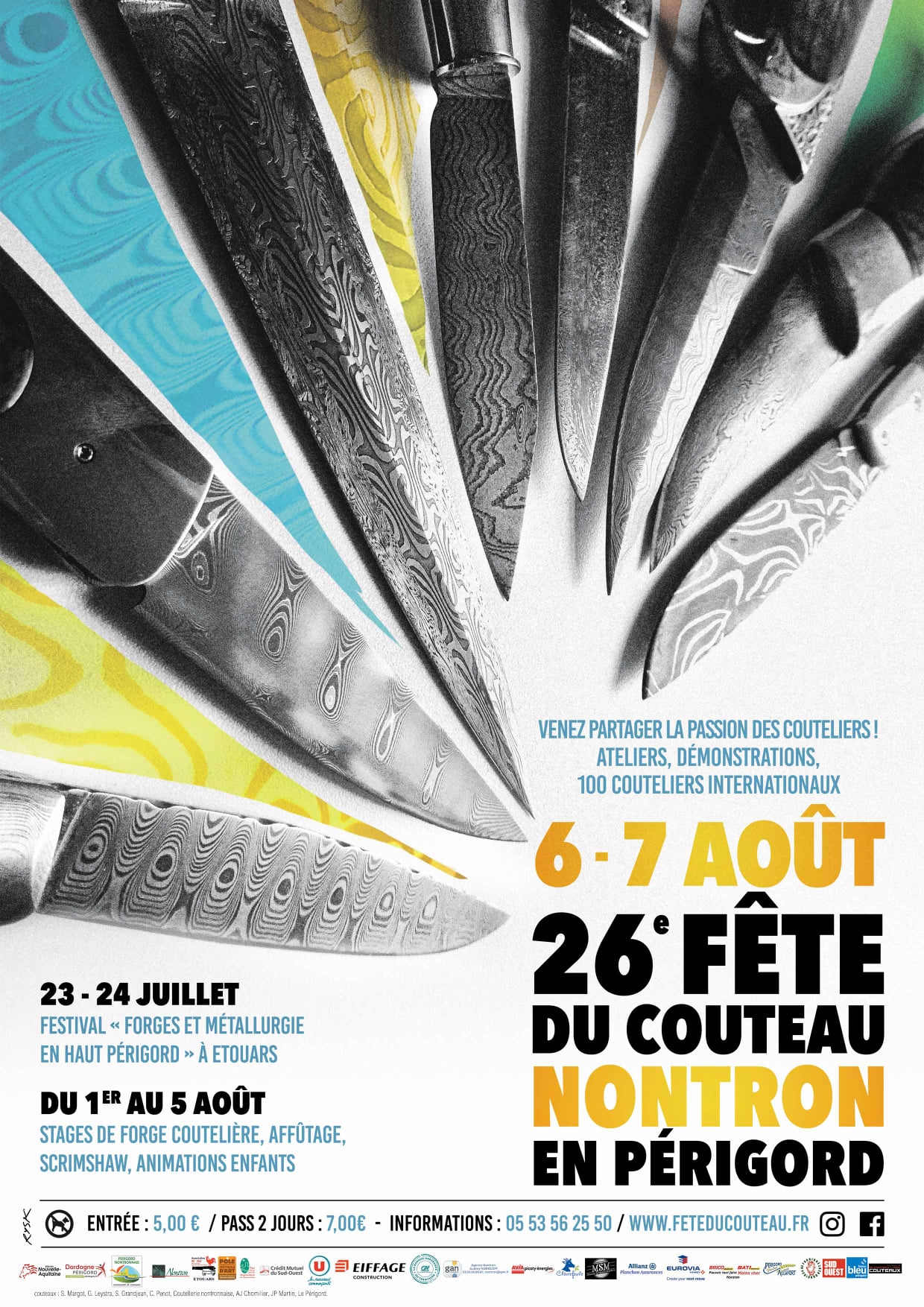 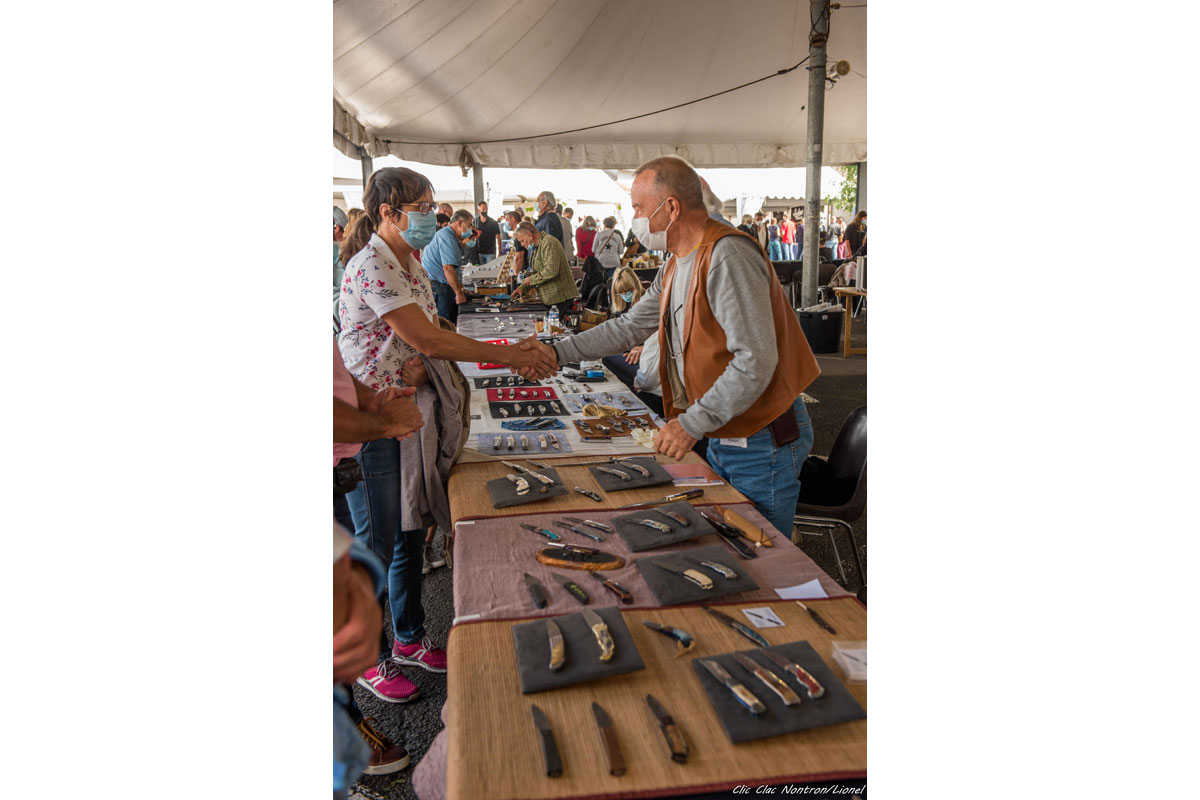 We are glad to welcome you in Nontron on August 6th and 7th for the 26th occasion of the Nontron Knife Show (Fête du Couteau).
We are very happy to welcome you this year with :
– Numerous cutlery manufacturers
– More demonstrations
– A competition of cutlery creation on the theme « The clever recycled »
– A photograph exhbition « Japanese workshop » and « Tribute to Eric Plazen » by F-X SALLE.
– Numerous propositions of internships for young and adults.

For 26 years, the cradle of the most ancient folding knife of France celebrates the multiple aspects of the millenial art of the cutlery manufacture. In Nontron, in the heart of North Dordogne, around a hundred cutlery manufacturers, craftsmen, creators and resellers from the entire world get together in order to share their passion with the public.
The Knife Festival welcomes renown cutlery manufacturers and also highlight talented young creators.
You will be able to acquire exceptional knives but also and above all discover the art of the cutlery manufactire through numerous animations all along the week-end : demonstration of sabre manipulation (kata and cut), workshops of knife assembly with the Kinfe Association LE THIERS®, demonstrations of cutting, engraving, forge, installation of a blast furnace…
On August Saturday 6th and Sunday 7th this is the entire city which will be animated with a market and concerts.

Making a knife is a long and delicate process. The cutlery manufacturer needs a lot of time and knowhow in order to give life to the object imaginated. You will then be able to discover numerous demonstrations for this 26th occasion of the Knife Festival!
– The art of Japenese saber manipulation
Mickaël AUGER will present to the public the art of saber manipulation and will make demonstrations of cut and katas. He will exchange with the public and prisent different types of sabers used in the martial arts.
– Fabrication of iron in a blast furnace
The association 3F3M will renew a demonstration of fabrication of iron in a blast furnace. This animation will allow to understand how the ore was transformed at one time in order to make metal. The extraction of the iron bloom will occur on August Saturday 6th from 4 to 6 pm.
– Forge
Several craftsmen and blacksmiths will animate forge demonstrations: the association Savoir Fer en Quercy, Alessandro SIMONETTI, Christophe MIKENDORFER, Gérard ALMUZARA, as well as the Belgian Knife Society (BKS).
– Demonstration of engraving
Once the blade is finished, it is time to take care of the handle of the kinfe. Mali IRIÉ-CROS will show how she realizes beautiful decorations while using the technic of engraving on metal.
– Demonstration of scrimshaw
Stéphane LEROUX will make demonstrations of scrimshaw and will answer the question of the public.
Sonia LUST will also animate an internship of scrimshaw and will present her creations on the stand of the BKS.
– Assembly of knife
The Association of Knife LE THIERS® will propose to the public to discover the assembly of knife and the marking of blades through demonstrations, but the public will also be able to try this art!
– Demonstration of cutting
Paulo SIMOES will propose to the visitors a demonstration of playful cutting and will answer every question the public has.
– Demonstration of cutting
On the stand of the famous cutlery manufacture SAPHORES, the visitors will have the pleasure to observe and admire a Japanese culinary cutting demonstration with Japanses knives from the brand KAI.

The cutlery creation competition
For five years, the Nontron Knife Show in partnership with the Experimental Pole of Arts and Crafts of Nontron and the magazine « La Passion des Couteaux » organises a cutlery creation competition. This year, the theme is « The clever recycled« .
In response to the aspirations of our time, to the current concerns regarding the environement and the sustainable development, the theme of the competition values the virtuous behaviours concerfning the supplies but also the valorization of offcuts. It highlights the process of recycling concerning both the use of old materials, which carry an history and the use of innovative materials.
The knife proposed will have to be essentially composed of recycled materials and elements, offcuts or upcycled waste. The reuse, the reinterpretation and the eco-responsibility will have the place of honour in the conception of the knife, from the blade to the handle.
The following criterias will also be taken into consideration by the panel: the cutlery knowhow, the technics used, the history of the nife and the aesthetic.
The panel will appoint a prizewinner « First Prize of the 26th occasion of the Knife Festival », on criterias of aesthetics, originality, harmony to the theme, quality and knowhow mastery.
The prizewinner will be named on August Saturday 6th during the official opening of the Knife Festival.
The knife selected « First Prize of the 26th occasion of the Knife Festival » will be acquire by the Community of Communes of the Périgord Nontronnais and will be part of the permanent collection of the Blades and Metal space.

During the Knife Festival, the entire city is animated during two days.
Children, adults, tourists…everyone will find something to satisfy his curiosity.

A market
August Saturday 6th from 3 to 7 pm and August Sundy 7th from 10 am to 6 pm
During the entire week-end, a market will be settled in the city center in order to allow everyone to discover the richness of the gastronomy and the arts and crafts of the territory.

A festive city
On August Friday 5th and August Saturday 6th by night, this is the entire city which will be animated with several animations and concerts in the bars and restaurants of the city.
The program :
August Friday 5th by night: pop rock concert in the bar Le Bacchus, Place Mérillon.
August Saturday 6th, 7 pm: French chanson concert – repertoire of Georges Brassens with the duo « La Cambriole » in the bar Le Trotteur, place Alfred Agard.
August Saturday 6th, 8.30 pm: concert of French and English rock covers of standards from the years 70/80 with the group « Série Limité » organised by the Club Sportif Nontronnais (Rugby).

Forges and Metal Festival in Etouars - July 23 and 24

In partnership with the Knife Festival, the association 3F3M organises the 9th Forges and Metal Festival in Etouars, ten kilometres away from Nontron. The public will be able to discover the ancient technics, sometimes millenary, of fabrication of bronze, of iron in a blast furnace and cannons in cast iron blast furnace. More than 20 craftsmen will create objects from the metals produced and will exhibit their workshop.